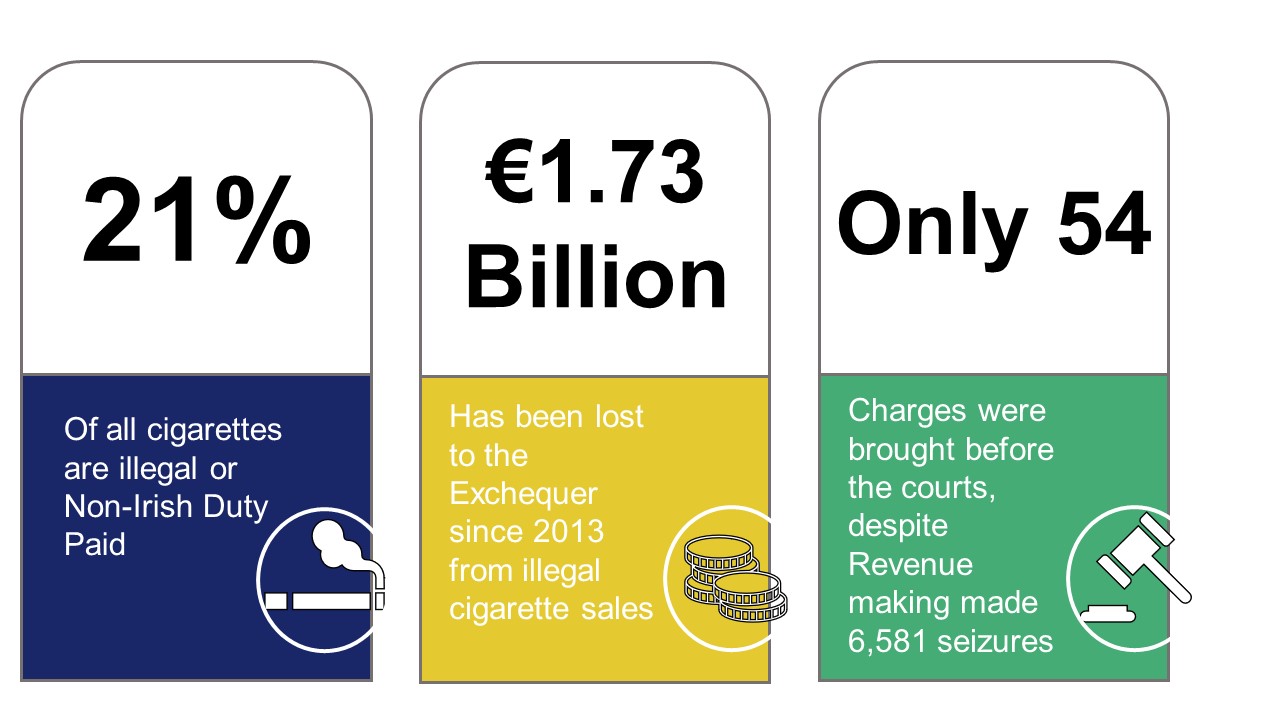 What is illicit trade?

All legitimate tobacco products sold on the Irish market must display a relevant duty paid Irish tax stamp. Product being sold or supplied in Ireland that does not display this stamp is classed as illicit product.

There are three categories in which illicit tobacco products fall under:

Smugglers source and smuggle illegal product in several different ways. These include:

2021 was a record year for illegal cigarette seizures:

What drives the illicit tobacco trade?

The illicit trade is driven primarily by price and the significant profits that criminal groups and individuals involved in the trade can make from smuggling and selling illicit tobacco products. As they pay no excise or tax on the smuggled product, they have a big margin to work within. That facilitates the growth of criminality in communities and allows criminal gangs to flourish and prosper. Furthermore, the people involved in the smuggling, distribution and sale of illicit tobacco products have no qualms about selling to and indeed, often using children to sell their product on the streets. The illicit tobacco trade offers consumers a value for money option compared to the high prices of legitimate tobacco in Ireland and the people involved continue to seek out new ways of supplying its target audience.

Over the last number of years, the Irish Government has taken the approach of significantly increasing excise duty on tobacco products. This has seen duties increase by 58% since 2014 and today sees a legitimate pack of 20 cigarettes retailing at up to €15.80 with similar illicit packs being sold for as little as €5. This price difference between legally sold and illegal tobacco products remains the single biggest contributory factor.

The citizens of Ireland and taxpayers are ultimately the biggest losers because of the illicit trade. Figures released from Revenue for 2021 show the illegal trade at 13% this equates to an excise loss of € €264 million to the exchequer. With the government not collecting these monies, it allows general taxes to remain at a high level to make up the shortfall and local and national services throughout the country suffer.

Other significant losers from this trade are the genuine retailers, who because of illegal selling in their community no longer see genuine customers visiting their store. A typical retailer reports tobacco sales to be an average of 20% of their overall turnover.

Who is the ultimate winner?

Organized Crime Groups and individuals involved in the illegal trade are big winners. The people at the top of the chain make the most profit but everyone involved to the street or end seller take a little profit from it. It is believed that the major organized crime groups use the vast profits to fund further criminal activities such as drugs and gun smuggling. In 2021 60.7 million cigarettes and over 38 tonnes of loose and roll your own tobacco product were seized representing a 431% increase compared to 2020 (the total estimated value was €67.6 million (up €30.7 million / 83%).

If these tobacco products had not been detained, and all product had been sold on our streets, it would have resulted in a windfall for criminal gangs.

Revenue confirmed that 2021 was a record year for tobacco and cigarette seizure. 60.7 million cigarettes seized and over 38 tonnes of loose and roll your own tobacco product were seized in 2021 representing a 431% increase compared to 2020 (the total estimated value was €67.6 million (up €30.7 million / 83%).

Smugglers are continuously adapting their methods and making it increasingly difficult for the Customs or Gardai to identify illegal consignment or routes and to conduct seizures. The authorities primarily charged with tackling cigarette smuggling are under resourced and subsequently are unable to develop intelligence or conduct enforcement action that would reduce the illicit trade or at least make it more difficult for the people involved.

The government needs to realize its excise strategy is not working. Year on year it fails to bring in the projected funds from excise duties, creating a lucrative market for criminals to thrive and failing hard working retailers from earning an honest living. We believe law enforcement agencies do have the necessary legislation to tackle these individuals however current laws, such as seizing cars and vans that have been used to transport illegal product, need to be enforced.