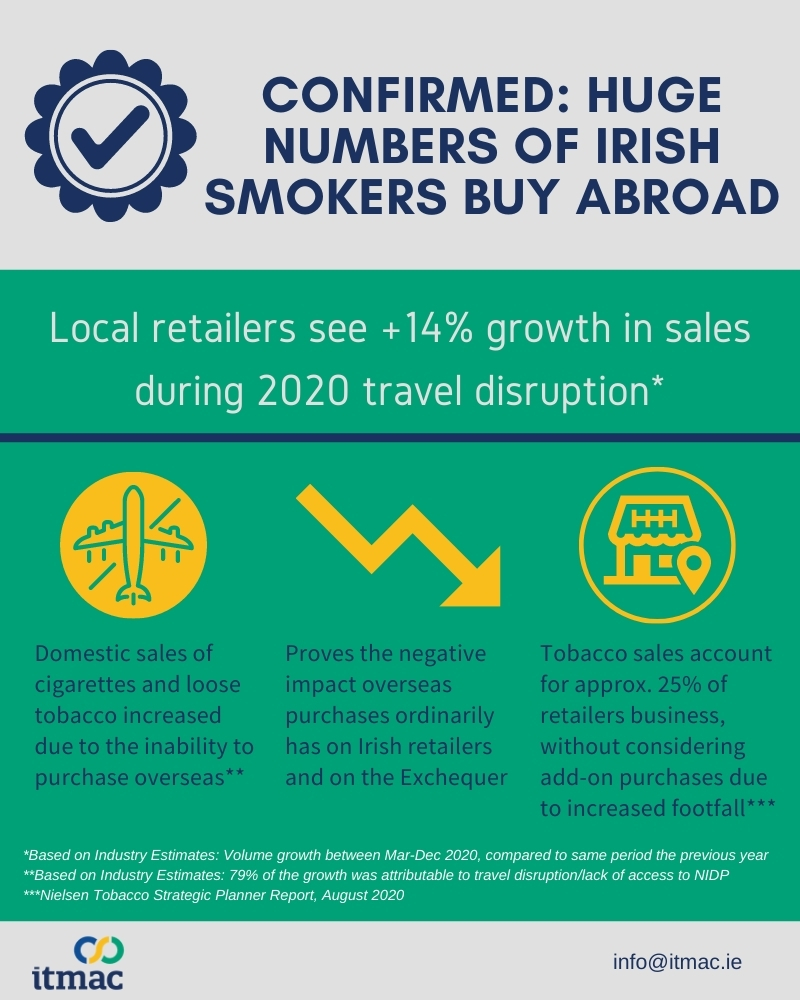 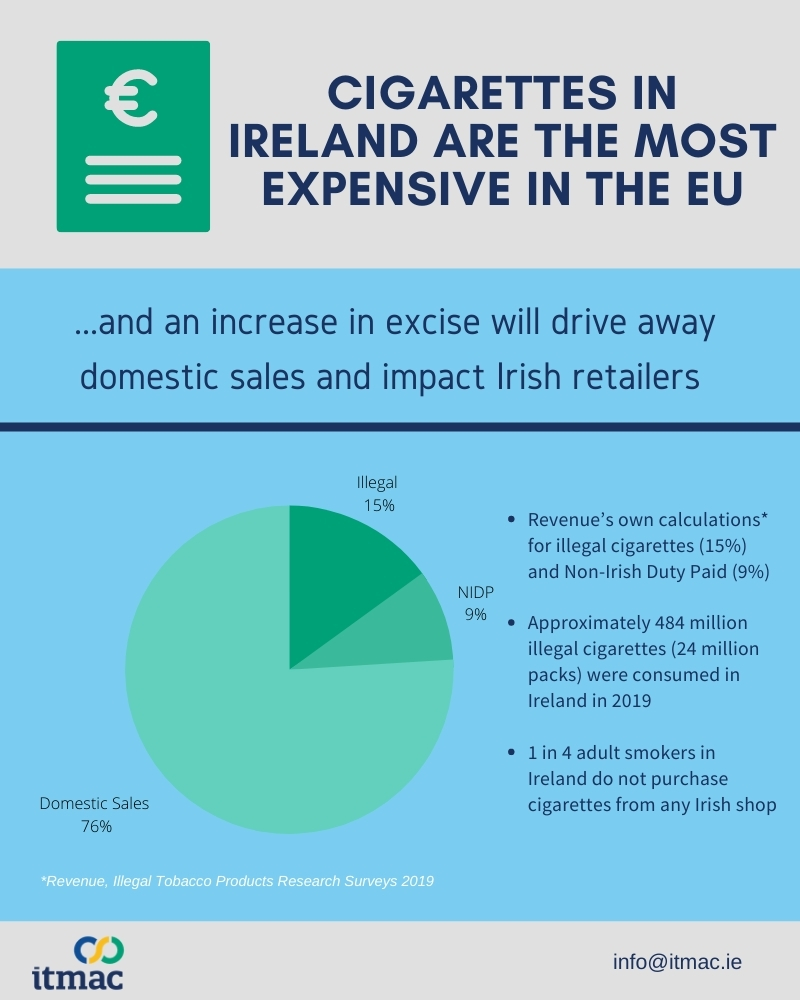 As tobacco taxes have risen, so has tax evasion. Tax-induced smuggling has become so widespread that it undermines both the revenue and health goals of higher cigarette taxes, while producing unintended consequences for Irish society as a whole, such as criminal activity and negative impacts on small businesses.

Particularly with the full impact of Brexit looming, a 2018 survey conducted by Retailers Against Smuggling has shown that retailers in the border counties are 63% more concerned about the impact of smuggling and illicit trade in their communities than they were a year ago.

The discovery of an illegal cigarette factory alongside the border in Louth in 2018 is huge cause for concern and shows that the criminality surrounding the illicit trade is growing in sophistication. According to Revenue’s 2019 Illegal Tobacco Survey, approximately 484 million illegal cigarettes (24 million packs) were consumed in Ireland costing taxpayers €242 million in 2019.

There is some acceptance at political level that excise increases are leading to an increase in illicit trade. Cigarettes in Ireland are now the most expensive cigarettes in the EU – increased excise drives consumers away from law-abiding retailers and into the arms of criminal gangs selling smuggled, cheaper, cigarettes. Those who purchase smuggled products knowingly do so because there is no deterrent or risk.

The first ever discovery of an illegal cigarette factory on Irish soil in March 2018 clearly demonstrates that the illegal trade of tobacco is going from strength to strength, with the methodology used by criminals constantly evolving. Up until now, illegal tobacco was assumed to have been sourced only through smugglers, both across the border and through our ports.

Tobacco excise forecasts on Budget day consistently over-estimate what is actually collected, for example in 2019 there was a shortfall of €16million on tobacco excise returns. This leads to diminishing, if not negative, returns.

As lower-income earners are more likely to smoke, they also bear more of the tax burden than higher-income earners, in absolute terms and as a percentage of income. According to statistics from Health Ireland Summary Report 2019, smoking rates are higher in more disadvantaged areas (24%) than in more affluent areas (14%).

Smokers represent about 17 percent¹ of the population which is currently subject to discrimination due to the heavy taxation on a product that they consume. Tobacco taxes are part of the “divide and conquer” approach to taxation. Smokers are voters and citizens. As such, they should be treated fairly in terms of fiscal burden. This is not happening when it comes to tobacco taxation.

Excise on cigarettes hurt local businesses and the overall economy

Many people travel outside Ireland to buy their tobacco products, and now we know that counterfeit products are even manufactured domestically by criminal gangs. This hurts local businesses. Cigarettes in Ireland are now the most expensive cigarettes in the EU – increased excise drives consumers into the arms of criminal gangs selling smuggled, cheaper, cigarettes and away from law-abiding retailers and adult smokers.